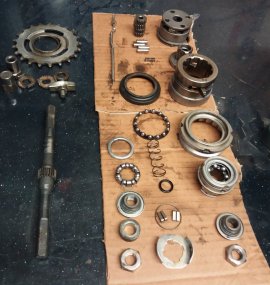 A google search finds few posts called DevOps in a Nutshell. As far as I am aware this may be the only one that mentions nutshells and how metaphors can help us understand DevOps.

I’m going to use nutshells to start a conversation about how the language we use can affect how we think about how best to organise. Our hidden metaphorical understanding of how things work also informs how we think, limiting the ideas we have and bypassing our conscious thought and critical thinking.

The first way of DevOps is systems thinking, and the performance of the entire system. The entire system contains people and machines. The dominant organisation metaphor in use is machine based. I’ll show others, and how they help the DevOps First Way, and understanding the entire system.

Before DevOps we treated machines like people – there was really no other way. They needed to be installed manually (pre Jumpstart and FAI, old people), it took about 9 months and when you’d finished you had an almost living thing that you gave a name. Installs were often path dependent. It mattered what order you installed things, and it was quite hard to get and keep multiple machines exactly in sync. The tools to work differently simply didn’t exist the way they do now.

There is also an old people management technique, called Scientific Management or Taylorism, after Frederick Taylor. Taylor invented and popularised scientific management at The Ford Motor Company. Taylorism took craftsmen & women (especially during WW2) and timed, measured, divided and controlled what they did until they were doing repetitive tasks on a production line, separated from the craft of what they were making.

Taylorism was popular with factory owners, much less popular with workers. Without it, we simply would not have the world of cars and technology we have today. Taylor also raised wages, so that Ford employees could afford Ford cars. It’s not all bad.

Now we have an abundance of approaches to treat people and computers differently.

We have automation, orchestration and monitoring tools for treating computers like machines, and the tools keep getting better.

Our approach to people is less mature. We still can often use the machine based metaphors and ideas. No one would have thought it unusual if I’d called the approaches to working with people ‘tools’. The machine metaphor goes deep.

If not machines then what?

It’s worth saying that it’s possible you may feel that people should be treated like machines. This is how Frederick Taylor saw the world and is dominant thinking in many areas.

Often I’ve found that those who feel people should be treated like machines usually mean other people. There is a difference between the thinkers and the doers.

If we think that other people should not be treated like machines, what are the alternatives? We could treat people like roads or books or gases. But I’ve not really thought these through…

Gareth Morgan wrote the seminal book Images of Organisation that contains a set of metaphors that cover most ways of treating people in our Organisations. Fortunately, he’s thought about the metaphors so I don’t have to. 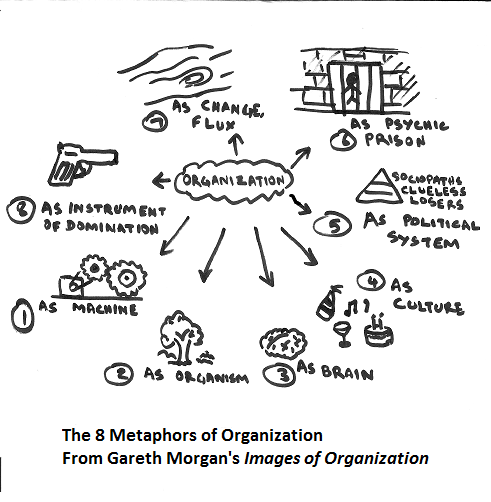 The organisation that your DevOps team is part of will be working in ways they cannot see if they only think with one metaphor. Using a variety of lenses increases our understanding.

The metaphors shown in the diagram above are

When using the DevOps first way to think about the whole system, the metaphors can help uncover and explain things that are happening. Viewing situation through the metaphorical lenses is revealing.

“In a Nutshell” not a great way to think about this topic. It suggests that “here is everything you need”, a complete explanation. When we’re working with people we need to be open to ideas and change.

I’ll use another post to discuss situations and responses through the lenses above.

This site uses Akismet to reduce spam. Learn how your comment data is processed.